ANALYSIS/OPINION: The outcome of the Turkish vote on constitutional changes, notwithstanding lingering allegations of fraud, represents further evidence of a crumbling global status quo. When Turkish President Recep Tayyip Erdogan declared victory in the narrowly divided referendum, it wiped away 93 years of Turkish history and nearly 70 years of Turkey’s prevailing concept of its place in the world. Add that to today’s global flux, along with the rise of China, the Mideast c

But many within the pro-Kurdish movement remain deeply skeptical there has been any momentous change in policy, "No one really believes that,” said Ertugrul Kurkcu, an HDP deputy and its honorary president, dismissing any hopes for a new peace process. He argued that actions speak louder than words.“The day after the referendum they arrested another HDP MP in Mus," he said. "Who is is going to make peace with whom? The government with their local henchmen will make a peace pr

On Friday, a court ruled that Zaman, previously linked to an opponent of President Recep Tayyip Erdogan, should now be run by administrators. Its last edition under old ownership on Saturday said Turkey's press had seen one of its "darkest days". Meanwhile, a newspaper set up by former Zaman staff was launched on Sunday. Police raided Zaman's Istanbul offices late on Friday hours after a court ruling placed it under state control, but managers were still able to get Saturday'
Play
download pdf
play
RSVP
YouTube
add to google calender

Why is Turkey’s Erdogan persecuting the Gulen movement? 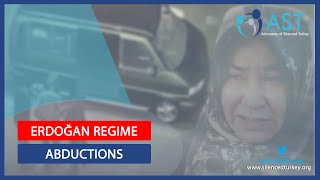 Erdogan Regime With No Limit In Injustice "Abductions"

THE CORONAVIRUS OUTBREAK IN TURKEY’S PRISONS: ANALYSIS OF THE CASES, FINDINGS, AND RECOMMENDATIONS

PRESS RELEASE: URGENT CALL TO ACTION FROM 15 ORGANIZATIOS TO TURKEY AND INTERNATIONAL ORGANIZATIONS

ART for Freedom – See Something Draw Something

© Copyright 2020 by Advocates for Dignity.